Our vision is nothing less than to LEND a HELPING HAND to the homeless on the Streets of Niagara Falls Ontario Canada. Today the drug usage, drug overdoses, fighting and violence, compounded by the lack of affordable housing are creating an enviroment that is challenging the resources and manpower of JC's Place Ministries. Plus it is escalating everyday. Compassion about what is happening on the streets is easy, putting that compassion into positive action, is what is needed to make a change in the lives of the vulnerable living on the streets or in temporary accommodations. To implement a sustainable program that improves conditions on the street needs your precious volunteer time to help to make a difference for future generations.

Preventing and alleviating human suffering in the face of trying times is accomplished by mobilizing the power of volunteers and donors. We are fighting every minute of every day to finish what we started and achieve our vision of LENDING a HELPING HAND to advance Locale understanding, of what is happening in your neighbourhood and by providing Lunches, Clothing, Personal Hygene Products, Christian Reading Material and other needs, we hope goodwill, and peace will be achieved through the improvement of health, and nutrition, helping to alleviate the poverty on the streets of Niagara Falls Ontario.

John and Pam are dedicated Volunteers who not only travel with the Ministry Van on Sunday afternoons for 3 hours; they also go out on Wednesday… maybe Thursday, Friday, Monday, Tuesday when the weather is in the 30 degrees plus range delivering cold bottled water and maybe a sandwich or two, to those who are truly on the streets without shelter from the elements. They visit less numbers of persons but are able to spend more one on one time with the homeless, an opportunity to engage in a more personal relationship building structure.  During this time John and Pam listen to the private needs that can now be expressed, prayers, hopes, joys, guilt, stories of misfortune, sorrows etc. and write down and list items that are requested making sure these items are on the ministry van for Sunday or passing on requests to other agencies who can provide bus passes, medical attention and counseling services.  Sometimes they come upon persons who need medical attention; on the spot right now, the following is a sad story to relate to you.

One Wednesday, John and Pam met a man with severe burns on his legs, telling them that he was attacked, held down and his legs burned with a torch, because his attackers thought that he had stolen goods and property and this was the revenge. Even after spending a month in hospital, and released back on the street with his cardboard sign, he was still in need of some bandages, gauze, antiseptic wipes to clean the open sores on his legs. Words of good cheer and two bottles of cold water and a small meal and some reading material were given. With a huge smile on his face, he said “Why are you so concerned about me?”  Then with thankful words and blessings he sent them on their way.

A little later the same day John and Pam came across a homeless couple, bringing food and water to them. Suddenly the man fell forwards hitting his head hard on the concrete structure they were sitting on; the lady with him was able to sit him up, but blood was streaming down his face and an ugly bump was forming on the front of his head, John ran back to the ministry vehicle to get a wash cloth and antiseptic wipes to clean up the mess.  The lady in the meantime began to administer CPR as the man’s face went from normal to ashen white and then to purplish blue, with his eyes rolling back into his head.  He had stopped breathing and she began to shout and yell “Call 911”, “Call 911”, “Call 911” !  Another man across the street was yelling and waving “they’re on their way, the ambulance is coming”. The overdosed man on the ground then vomited all over the lady doing the CPR, while she was yelling “it’s okay he’s coming back.” John responded to her, “The ambulance is still coming.” Again the overdose victim fell back and his eyes rolled back again and the colour went to the purplish blue. Paramedics arrived and took the man to hospital. We cannot tell you the final outcome but I’m sure you can surmise the sad ending.

Still further to emphasize the cover story, Pam and John found out that another man who they had visited many times, died of an overdose on the street, and the stories continue.  Another lady who has been on our list to visit every Sunday at her Tent home was hit by a car, suffering numerous injuries, and is in hospital right now.  And still another homeless man who has been served many times, received a stab wound in his chest. He survived the attack and after a hospital stay, this past Wednesday August 25th was back out on the streets with a patch on his chest. He rode up to John on his bicycle and asked for cold water, saying, “John, God spared me. I am the one who was stabbed in the chest and just got out of the Hamilton Hospital.”  John gave him a hug, and said, “I am glad you are here,” and gave him the water requested and the book Steps to Christ, and encouraged him to read the book. “I will, I will,” he said.

With all of the events related above, John stated “I sometimes come home in silent tears, wondering if I and the Ministry are making any difference in this world that is so full of needs . . . physical, spiritual, mental, and more. “Are we making a difference?”  AND THE STILL SMALL VOICE SAYS,“ Let your light shine before men, that they may see your good deeds and praise your Father in Heaven.” Matthew 5:16

“Thank you for listening to our stories. Your prayers and support are needed and welcomed.”        ~John and Pam

why we need your help

To Create Better Life on the Streets We Need Your Help 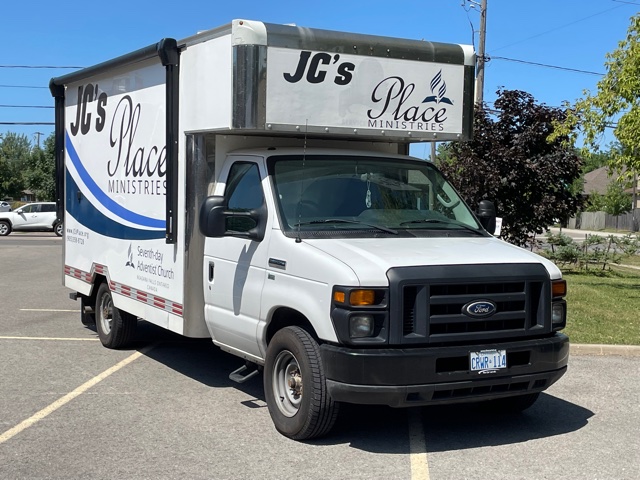 JC’s Place is a mobile Ministry of the Seventh-day Adventist Church of Niagara Falls Ontario Canada. Working to meet the needs of the homeless and displaced persons of the city.  We currently operate two mobile  vehicles 1. Ford E350 Cube Van  2. Saturn Vue Suv. Distributing Food, Clothing, Health Care Items, Christian Literature.  Anyone on the street can flag our vehicles down and we will try to LEND a HELPING HAND to those in NEED.